From my italian American friend who gave me homemade pignoli Cookies for Christmas, here's the recipe: 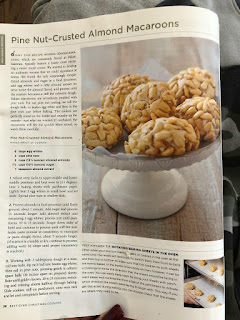 I was amazed at how unique these taste. Then after baking them I am now amazed at how easy they are to make.
I didn't have enough almonds nor any almond extract, so I added orange zest and a dab of honey (both options I found in different recipes for this cookie). 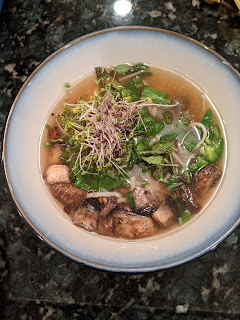 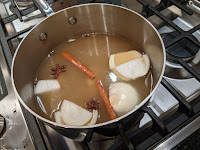 INGREDIENTS
Soup
Two 3-inch cinnamon sticks
3 Frontier whole cloves
2 star anise
1 large white onion*, peeled and quartered
4-inch piece of fresh ginger*, peeled and halved lengthwise
4 cups (32 ounces) vegetable stock or broth
4 cups water usually it uses 8 cups stock/broth... since combining with water make sure to use salt!
2 tablespoons reduced-sodium tamari or soy sauce
6 ounces (one large handful) rice noodles
1 tablespoon avocado oil, mild extra-virgin olive oil or your neutral-flavored oil of choice
5 ounces thinly sliced shiitake mushrooms
Salt
Garnishes
Mung bean sprouts
Sprigs of fresh basil (use Thai basil if you can find it) or cilantro
Sprigs of fresh mint
Thinly sliced green onions (mostly green parts)
Very thinly sliced fresh jalapeño (omit if sensitive to spice)
Small wedges of lime
INSTRUCTIONS
NOTES
*FOR EVEN MORE FLAVOR: Char your onions and ginger before adding them to the pot. If you go this route, just slice the onion in half (instead of quarters), and don’t peel the ginger. You have a few options on how to char them—you can supposedly char them with metal tongs over a gas flame (I don’t have gas, so I couldn’t try this), or broil them, cut sides down, on a baking sheet, or—the most reliable method—roast them, cut sides down, on a baking sheet, on the upper rack in a 500 degree Fahrenheit oven for 15 to 20 minutes.
**Receipt from Cookie + Kate
Posted by Sharón at 9:39 AM 0 comments