Frosting Directions
1. Cook butter in a small heavy saucepan over medium heat, stirring constantly, 6 to 8 minutes or until butter begins to turn golden brown. Remove pan immediately from heat. Pour butter into a bowl. Cover and chill 1 hour or until butter is cool and begins to solidify.
2. Beat butter at medium speed with an electric mixer until fluffy; gradually add powdered sugar alternately with milk, beginning and ending with sugar. Beat at low speed until well blended after each addition. Stir in vanilla.

Comments: The cake batter is very thick and turns out similar to a cookie dough consistency.  Very interesting. Not my favorite cake, but definitely would make it again for the right occasion. Shocking realization that others don't agree - only received 2/5 stars on recipes.com.
Posted by Sharón at 7:30 PM 0 comments

Directions:
* Grill sliced pears on medium heat for approximately 5 minutes, 2.5 on each side. Remove and cool for 5 minutes
* Add all arugala, onion, walnuts and yellow raisins into a bowl and mix. Add grilled pears.
* Serve with balsamic vinaigrette dressing.

Every now and then it's nice to try a vegetarian or in this instance even gluten free recipe. I didn't love it, but I would make it again if in need of a vegetarian warm side dish. Modified version of original recipe, posted on girl cooks world here. 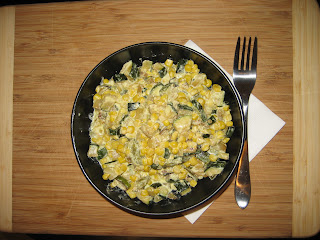 Instructions
Place the zucchini in a colander and mix with the salt. Let stand over a plate or the sink for about 1/2 hour to draw out any bitter liquid. Rinse and pat dry or drain for several minutes in the colander.

Serves four.
Posted by Sharón at 4:33 AM 0 comments 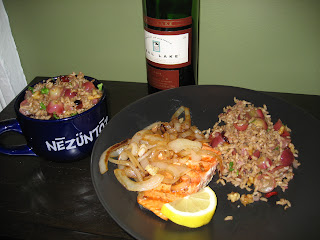 I tried this at my friends house over the weekend and had to ask for the recipe. The recipe itself originally published in Southern Living's March 2010 issue. See it here.